Things We Should Know

If you’ve been reading my little posts for a while, you’ll know how I decry irresponsible journalism. On the flip side, I am an admirer of good journalism – writing that informs about legitimate debate and shows signs of painstaking research and fair examination of both sides of an issue.

Once again, Time Magazine shows us the difference between legitimate balance and useless filler. Jenny McCarthy is the subject of an article in which she claims to have ‘cured’ her autistic son. Oddly enough, Time manages to both justify (poorly) thir reasons for running the story and indicate why it shouldn’t have run in the first place:

To McCarthy’s opponents, from the public-health officials at the Centers for Disease Control and Prevention (CDC) to the pediatricians of the American Academy of Pediatrics, this makes McCarthy much worse than a crank: she’s a menace to public health.

So, the recognized scientific authorities on this topic disagree with the half-wit actress and former Playboy model? It’s not hard to decide who carries more authority in this case.

They ask why so many mothers are reluctant to vaccinnate their children based on McCarthy’s insistence that they are dangerous. That’s an easy one: They are idiots. Easily-led, scientifically illiterate idiots. Articles like this one will only make the problem worse, thereby giving Time the opportunity to exploit the resulting catastrophic preventable illness rates somewhere down the road.

In responsible scientific journalism, debate is important – two sides, both interpreting evidence they have gathered, but who have reached different conclusions. This is the essence of constructive debate, and is reflective of how science is built – good scientists always accept the possibility that they may be wrong. All of it is based on evidence, however. To juxtapose the results of hundreds of scientific studies with the beliefs of a third-rate actress is clearly wrong. The arguments are not coming from the same basis of assumptions – one is systematic, the other emotional. The evidence is clear: vaccinnes do not cause autism. Even the single study cited by vaccine panic-mongers is an admitted falsification, and is therefore invald. Preponderance of scientific evidence vs. fake science and anecdotal belief. Which should you choose?

Yet, Time insists on perpetuating the myth by giving McCarthy a venue to create more risk to children.

Let’s use a crude (very crude) analogy to demonstrate: I hereby deny the existence of Australia (no offence, just the first thing that came to mind). I’ve never seen it, except on maps. Well, what is my motivation to trust the representatives of the mapmaking industry? They have a vested interest in maintaining the illusion that Australia exists. How else would they maintain sales of maps of certain portions of the Southern Hemisphere?  Basically, I’ve never been there, never experienced the country directly, so I don’t believe it. What about all the people who have been there? In the pocket of Big Cartography. All the pictures? Faked – probably New Zealand or clever photoshops.

So, within a logical (although deeply flawed) framework of belief, for which I could probably gain support from at least a fringe portion the billions of people who have also never visited there, I have made my case. I demand equal time in Time to defend my views, because only then will they have fairly presented all sides.

In a word, no. Time, and other venues, need to wake up to the fact that not all views are equal. Despite the insistence of politically correct postmodern apologists for the validity of all ways of knowing, some beliefs are demonstrably, objectively and irrefutably wrong. Jenny McCarthy’s views on the link between autism and vaccines is one of them.

I know, my position is impossibly naive and not reflective of the competitive world of infotainment that news has become, but I can still hope for better. I can hope for someone, somewhere, to wake up and realize how irresponsible this type of reporting is. Somewhere in the world is an editor who can stand up and say, “No more”.

Except in Australia, of course.

The iceberg, measuring about 50 miles by 25, broke away from the Mertz glacier around 2,000 miles south of Australia after being rammed by another giant iceberg known as B-9B three weeks ago, satellite images reveal. The two icebergs, which both weigh more than 700m tons, are now drifting close together about 100 miles north of Antarctica.

I’m sure this is just an isolated event, though. (It’s not) No global climate change to see here, people. (unless you actually inform yourself with the data on global sea level rise, or global glacial retreat) Seeing as how global climate change is a hoax, I respectfully suggest to Maxime Bernier that he take up temporary residence on this newly calved giant berg. He can return to Ottawa when it melts, and let us know how that whole “hoax” angle worked out for him and the Conservative base.

Just a note to inform Blevkog readers, particularly those of a more geekish bent, that I will be posting sections of a work in progress on our sister blog, Revenge of the Inner Geek. The posts are excerpts from a longer work in progress regarding bad sci-fi movies, and hopefully there’s a chuckle or two contained within.

Consider this a hopefully-effective method of moving closer to a writing career.

Shameless plug complete, take a trip over and check it out. Thank you for your attention.

but I had a waffle idea for breakfast this morning. 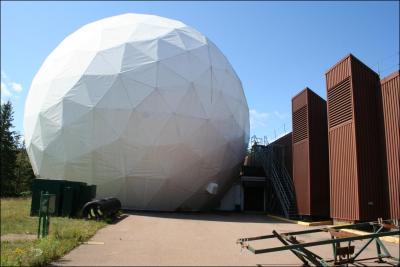 For only one low payment of $1.4 million, you can own a former NATO satellite station. This comes complete with “…backup power, a sterile work environment, top-notch security features, an exterior workshop and living quarters that include a kitchen, deck and four sleeping areas.”

This is a great buy because, as we all know, the most defining feature of a supervillain, besides his choice of matching costumes for his henchmen, is his lair – it is absolutely crucial in order to gain the respect you deserve, not to mention facilitating world domination. All you’d need is a bit of paint to make the satellite dish cover in the photo look like a skull, and Bob’s your uncle.

Property listing is here. I, for one, am going to start saving my pennies.  Excuse me while I go work on my hideously eeeevil laugh.

I’m sending the following question to the CBC via their comments page:

I frequently contribute stories of interest to a close friend’s blog. Occasionally, I snip a quote from one or more news sources, including the CBC, and provide a link to the original source (and accreditation if available). Sometimes I have something less than flattering to say about the article’s content, as I may disagree with the author’s point of view on the subject. Does your new copyright infringement policy make such blog posts technically illegal? Is it the snippet quoting that CBC objects to, or the occasionally disagreement over the content? I’d hate to get the blog owner in financial or legal trouble over a snippet, thinking that “fair use” applied. I’d especially hate it if it happened because I voiced disagreement with a CBC columnist or management. Perhaps I should ensure that any and all links to CBC articles are eliminated from my blog posts to avoid any issues. I’m sorry for any internet traffic my humble posts may have inadvertently sent to the CBC in the past.

Thank you for your quick response,
(myname)